The 2020 edition of the Andorra Chess Open will be held under the following rules:

1. The tournament will be a nine round Swiss. It will be held from July 18-26 2020 both inclusive. It will take place at the Panorama Hotel in Crtra. de l’Obac s/n (Escaldes-Engordany).

2. The time control is 40 moves in 90 minutes and 30 minutes for the rest of the game with an increment of 30 seconds per move starting from the first move.

4. Clocks will be started punctually. Any player who arrives at the chessboard more than 30 minutes after the start of the session shall lose the game.

It may be requested not to be paired before the next round with zero point evaluation. A player will be eliminated after two successive unjustified defaults.

5. An appeals committee will be chosen by the participants during the first round by voting, and it will be made up by 5 participants, two of whom will act as substitutes in case that some conflicts affecting one of the entitled come up.

6. The registration of the players will take place on July 18 in the Tournament Hall from 10:00 to 14:00 hours. Any player who fails to register in person or notify the organizers won’t be paired in the first round.

7. The fees have to be paid before the beginning of the first round. Organizers have a set registration limit of 170 players.

8. Any complaints have to be made in writing and have to be presented to the Appeal Committee within one hour after the end of the session. The decisions of the committee shall be firm for all purposes.

9. Following FIDE current regulations, any player carrying an electronic device (even disconnected) will immediately lose his or her game. An electronic custody service is available for those players who request it.

10. Smoking will not be allowed in the tournament Hall.

11. Players will not be able to leave the tournament hall without a justification or the permission of the arbiter.

12. The tie-break system will be decided once the tournament has finished, in the presence of the Appeal Committee and among the following options: 1. Median Bucholz, 2. Bucholz, 3.Performance.

The tie-break will be valid for both the general standings and the achievement of trophies and cash prizes, which will not be shared among the tied players. The Closing Ceremony is July 26 at 15:15h.

Tournament participants authorize the publication of their personal data in different media that the organization considers desirable for the necessary dissemination of the event (lists of results, standings, participants, photos, videos, etc.) 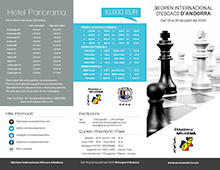